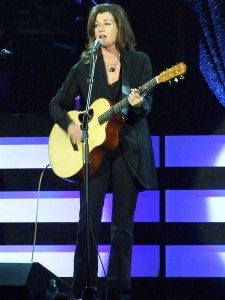 Independence Day weekend 2011 is bound to be remembered as the Dawn of the New Millennium of Peace & Understanding because that was when James Taylor leapt across the cultural divide into the arms of Amy Grant and Vince Gill, in front of back-to-back sold-out audiences at Tanglewood. This was a big surprise; we don’t do country at Tanglewood. (Photo: Scott Caltron )

They tried it Fourth of July 2006 with LeAnn Rimes – really good concert, but half-empty Shed. That experience may have factored in to the secrecy leading up to these shows and the fact that the guest performers weren’t announced until the day before the show, well after they had been sold out, even though the date had been made months earlier.

Here’s the shocking news: the two shows were seamless; there were no jolts, nothing at all abrupt in the transitions between the several numbers each of the guests did in the midst of Taylor’s concert routine. It’s all pop entertainment, people, despite the machinations of merchandisers and principalities such as the CMA and the Grammys.

Furthermore, any dissimilarity between and among songs of James Taylor, Amy Grant, and Vince Gill were washed away by the sameness of self-deprecating adulation each evinced for the other headliners on stage.

Amy Grant is a knock-out, plain and simple, wholesomely pretty appearing toward the end of the first set in sexy summer dress with shawl that got lost for the second set both nights as did her shoes! She did her 20 year old Baby Baby to everybody’s delight.

Vince Gill too looked right at home in the Koussevitsky Music Shed, wearing grey slacks and jacket with a black collarless shirt – rather metropolitan. His song Pretty Little Adriana was a highlight of his mini-sets, especially his deft, searing blues guitar playing. No wonder Gill is a regular at Eric Clapton’s Crossroads festival.

James Taylor was no less good, and effusive as always in his regard for his band with whom he worked up a fresh sampling from his ouvre for these shows. Our favorite both nights was Steamroller, delivered in about half the time but with maybe double the oomph of earlier Tanglewood performances. Two or three minutes into it, ace sideman Larry Goldings took the lead on the Hammond B3, then it segued neatly back to Walt Fowler on muted trumpet, before coming front and center for James Taylor and Vince Gill’s guitars. Very cool.

Another highlight for us was some jazzy singing by Taylor – several little riffs that were like the vocal equivalents of guitar solos. They emphasize the joy he takes in his work and make it feel as is he is truly into the current presentation of the song and bringing it to life rather than merely involved in yet another recitation of it.

We sensed that, in his patter this week, Taylor has given additional prominence to his 1968 anointing by the Beatles. As grateful as we are to him for introducing Amy and Vince to us this year, perhaps he’ll be more Beatle-esque next summer and invite to Tanglewood some mixed-up homesick youngster at the dawn of a startling career?