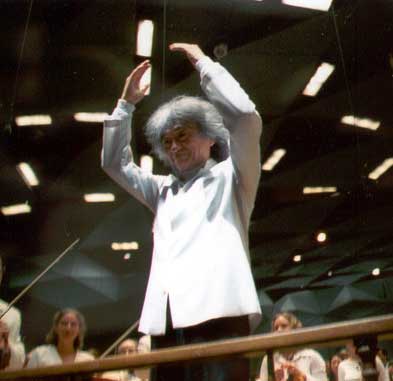 Nearly 20,000 fans witnessed Seiji Ozawa’s last turn leading Tanglewood on Parade, the annual celebration of (and fund-raiser for) the Tanglewood Mucic Center. It was probably the last time we’ll see him cue the cannon of the Eastover artillery battery that joins the massed orchestras for the 1812 Overture, the traditional close to the program, but probably not his swansong as cannoneer. That’s because he received as a parting gift an authentic Civil War cannon, which is more likely to end up at his West Stockbridge cottage than to follow him to Austria, where he becomes director of the Vienna State Opera next year.

The spectacle of Tanglewood on Parade reminds us that these Berkshire acres are the world of music’s summer home. This year’s TMC fellows, who will go on to careers with the world’s great orchestras, came to Lenox from places such as: Tirana, Albania; Shannxi, China; County Louth, Ireland; Jerusalem, Israel; Amarillo, Texas; and Kishinev, Moldovia. Throughout the bright, sunny afternoon, they gave recitals, ensemble, and chamber performances across the Tanglewood campus..

Maestro Ozawa, of course, was the star of the evening program, taking turns on the podium before and after stints by André Previn, Keith Lockhart, and John Williams. Second star went to Chris Brubeck, whose composition, Convergence: Concerto for Pops Orchestra was given a wonderful performance by Lockhart and the Boston Pops.

The 8 PM brass fanfares by the TMC Fellows, including Copland’s elegiac Fanfare for the Common Man, serves to draw the audience’s attention away from the conviviality of the lawn and toward the Shed. The opening number, Verdi’s Overture to La forza del destino, focused their attention on music. It was loud and fun, marked by crescendoes that one could’ve walked away humming if it hadn’t been followed by even more memorable music.

Previn followed Ozawa on the podium to conduct the TMC orchestra performing Benjamin Britten’s Sinfonia de Requiem, which was commissioned in celebration of the 2600-year history of Imperial Japan in 1940. Previn, whose conducting style looks the antithesis of Ozawa’s, elicited a fine performance from the orchestra, which brought the piece to a stirring close.

Lockhart and the Pops opened the second half of the program with the very engaging and intriguing Convergence: Concerto for Pops Orchestra, which was commissioned just last year by the BSO and premiered at Symphony Hall on May 16. As the 49 year old Brubeck wrote then, “They wanted a piece that would weave classical, jazz, and even funk elements…to challenge and showcase all the sections of the orchestra.” Well, he scored big time, particularly in the second movement which had great jazz elements, including a trumpet and trombone duet, some deft brushwork by the drummer, and a teasing coda that fooled most of the audience.

This august institution on sacred grounds amid these hallowed hills being all about tradition, a new one seems to be Pops emeritus conductor John Williams’ cienmatic interlude. This year’s entry was “Hedwig’s Theme” from the upcoming blockbuster movie, Harry Potter and the Sorcerer’s Stone. Williams followed that with the lovely A Hymn to New England, which he wrote to accompany a documentary-travelogue for the Museum of Science in Boston.

Then Williams made the presentation to Ozawa of the cannon, which was rolled onto the stage temporarily. After brief remarks by the Mastro, he led the combined orchestras in a fresh and powerful rendition of Tchaikovsky’s famous overture. One wonders what thoughts lay behind the enigmatic expression on Ozawa’s face as he turned to cue the cannoneers one last time? Everything else was clear as a bell, including the sky over Stockbridge Bowl where the fireworks show brought a brilliant close to a memorable day.