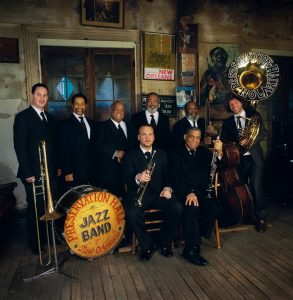 The Preservation Hall Jazz Band will perform in concert at The Clark Art Institute in Williamstown, MA on Friday, February 8, at 8:00 pm. Named for a building located in New Orleans’s French Quarter, Preservation Hall Jazz Band was founded in 1961 by Allan and Sandra Jaffe. The band has traveled worldwide, spreading their mission to nurture and perpetuate the art form of New Orleans jazz — a mission strengthened by the devastation brought about by Hurricane Katrina in 2007. Advance tickets are $42 ($38 members and students); $45 at the door. To order tickets, visit clarkart.edu or call 413 458 0524.

Whether performing at Carnegie Hall or Lincoln Center, for British royalty or the king of Thailand, this music embodies a joyful, timeless spirit. Under the auspices of current director Ben Jaffe, son of founders Allan and Sandra, Preservation Hall continues with a deep reverence and consciousness of its greatest attributes in the modern day as a venue, band, and record label.

PHJB began touring in 1963. Many of the band’s charter members performed with the pioneers who invented jazz in the early twentieth century, including Buddy Bolden, Jelly Roll Morton, Louis Armstrong, and Bunk Johnson. Band leaders over the PHJB’s history include the brothers Willie and Percy Humphrey, husband and wife Billie and De De Pierce, famed pianist Sweet Emma Barrett, and Wendall and John Brunious. These founding artists and dozens of others passed on the culture of their music to a younger generation, who now follows in their footsteps.