Listening to a poet say his poems is an opportunity to glimpse words at work. Words were at play when Paul Muldoon with Rogue Oliphant held forth in the rectangular wooden barn upslope from the round stone one at Hancock Shaker Village, October 6, 2018.

Said to be “The most significant English-language poet born since the Second World War,*” Paul Muldoon dazzled the audience with a dizzying array of word play, while his “loose affiliation of composers and musicians” transformed the barn into a CBGB satellite. (*The Times Literary Supplement)

The amiable Muldoon speaks softly and slowly; his voice a good vehicle both for holding the audience’s attention and for carrying them to Ireland, home already to four Nobel Literature laureates, including Seamus Heaney, Muldoon’s college tutor.

Chris Harford, on guitar and vocals, was an apt foil for Muldoon; one resembled a staid professor while the other stayed true to rock star form. Muldoon would wander away from the mic for long stretches, sometimes after saying the lyric a cappella, then leaving the band to animate it – with ballsy bass lines, insistent drum taps, sick guitar solos and wailing fiddle licks. 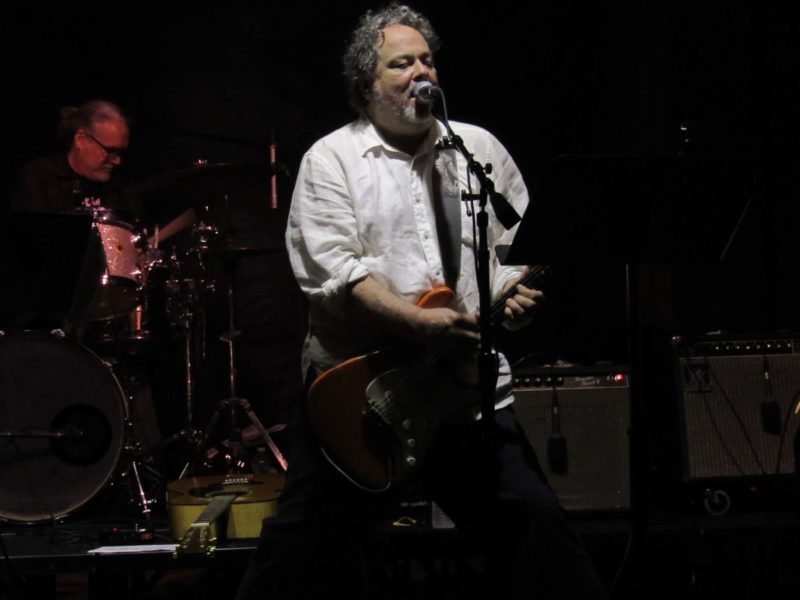 On fiddle and guitar was David Mansfield, whom we first saw in concert when Bob Dylan and the Rolling Thunder Revue played two shows in Springfield. Speaking of Dylan, here’s what the late poet Donald Hall told me about him getting the Nobel: “Curiously, when I read Bob Dylan on the page, the words make no sound! Poetry-sound is utterly different from music. When he sings them, I reckon that they make a good noise!…Phil Roth should have won the Nobel, and now he never will.”

I don’t mean to disparage Dylan, whose bandwagon I’ve been riding practically since it left the station – but, just like him, I know there’s a difference between a poem and a song. This project of Muldoon’s is worthy of widespread attention, because it is so much fun, with such great music, audiences may wind up falling in love with language itself. Then they’d become better listeners, they’d pay closer attention …

Funny thing about this concert is that it concluded with a song, Comeback, that describes the way the season at Tanglewood now opens: heavily-hyped shows by remnants of rock royalty – a sad spectacle often, but excusable when the royalties, too, have dried up.

Introducing it, Muldoon referred to The Who – competing remnants of which have played there the last two seasons, taking up the space and time that should be reserved for musicians with something new to say – as they themselves did when they dropped by five days before Woodstock!

The Irish Arts Center in NYC is the locale of Muldoon’s Picnic, which convenes on the second Monday of the month, featuring Rogue Oliphant and – as Chris Harford puts it, “Paul’s literary friends, like Salmon Rushdie and Joyce Carol Oates.”