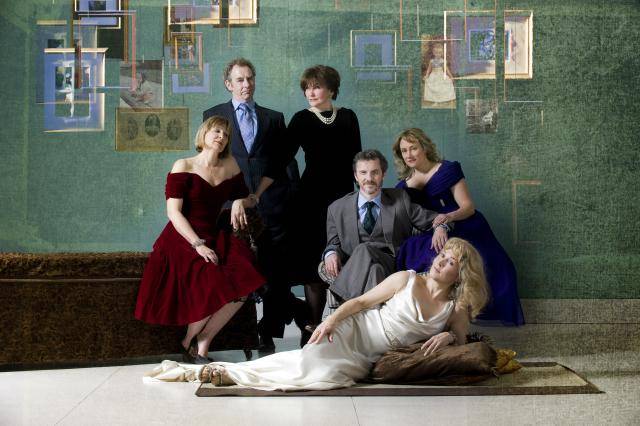 Shakespeare and Co’s riveting production of Shelagh Stephenson’s Memory of Water, has been playing to rapt audiences at the Bernstein Theatre for the past month, and praise for the script, the six talented actors, the direction and all aspects of the play have been deservedly lauded. Therefore, this belated viewing of the play will confine itself only to a discussion of the four women in the script and the incredibly nuanced performances they perform, several times a week.

The action covers a small period of time and all takes place in the bedroom of the mother of three daughters, assembled at home for this weekend of the funeral of that mother in the small Northern England home in which they all grew up.

More significantly, the only set is the bedroom of that mother, dominated by the huge bed in which she slept and the closets full of her clothes, the dressing table full of her adornments. And even her ultimatum that she “rest” (in her coffin) in that room the night before her funeral.

Even from the beyond she returns to dominate. Annette Miller as Vi, impeccably dressed in dark green and not a hair out of place appears in two cameo’s with her daughters in which, as it was in life, all about her and without any thought of pity for the conflicted and grieving children She moves with a calm elegance, self-assured. Still vain, selfish and not much interested in or sympathetic for her children. When on stage, she dominates as she did during their growing up, a time in which her life was more important than theirs. Miller plays her to perfection.

And how have those children turned out? She might have been vaguely interested in having a handsome son. But her children where three daughters, the third totally unexpected, menopausal.

That child, the most rueful of all, Catherine, for me was the saddest one of all. She explodes into the room when she arrives, booted, padded coat, earflap cap and baggage covered with snow. Elizabeth Aspenleider knows how to explode. She is antic, chatting a mile a minute about a latest suitor who will be arriving for the funeral (he won’t, he is “suitor” in her mind more than his) but for most of the first act her buoyant character revs up the chat and the action into which she pulls the other sisters into defrocking the closets bursting with mother’s gowns. The is boisterous, hiding the knowledge she has always had of not being wanted in the family roster, not being able to keep the boy friends she meets, not having a sense of how wrongly dressed she is for a funeral.

Mary (Corinna May) one of the two elder daughters has succeeded on worldly terms, become a doctor and has for some time been mistress of a married man by whom she longs for his separation from his wife and the fathering of a child by her. Doctor that she is, she knows her birthing time is running out. One yearns for her to have that child. She would love it, nurture it as her mother failed to do for her.

Teresa (Kristin Wold) is the other elder sister, the one who stayed in the town near her mother. She is a health food nut, is prone to settle on details as to casket choice etc. A topic the other two don’t seen smitten with. Having been the only one of the three who remained home in the sense of evidently marrying and living not with her mother but nearby, the event of her mother’s last illness and dying at 75 has rested mainly on her. Her husband, for she has one, travels all over the landscape in connection with his job in the food business. Her life has been dull at best and is not apt to change much.

As the door closes on these three children, each dressed for the funeral as her own feelings and character seems to define she should, one can feel they have a certain resilience and will carry on—though I personally worry about Catherine, the so unwanted baby, and the fact that the so-wanted baby of Mary will never be born.

It is a tribute to the author that within a short play, she can bring so much of the rough and tumble of the lives of these women to vivid life and create the roles the four actresses so illuminate.

But it is further important to note that despite the maternal neglect, this is not a depressing play but a buoyant one. The dialog is witty and much of the time very funny. One enjoys the play and the characters. One believes in them as real people, coping in a weekend of stress, but capable, although mother-maimed, of going on with lives of their own, such as they may be.

The standing ovation at the play’s end is for resilience. These women will carry on and put the weekend behind them. Life goes on.

And this dynamic play goes on til Labor Day.

BSO.org is the only official source for purchasing tickets to Tanglewood performances and events. If you do not see BSO.org in the address bar when viewing the performance schedule and purchasing tickets, please close your browser and visit www.BSO.org. Tickets are also available via SymphonyCharge at 888-266-1200.