You are here: Home » Outdated schedules » James Taylor to play Bob Crachit in A Christmas Carol 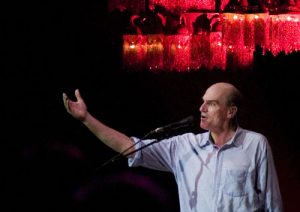 James Taylor who has been a resident of the Berkshires for several years and a frequent summertime attraction at Tanglewood will become a downtown Pittsfield attraction when A Christmas Carol opens on December 17 for a two week run at the Colonial Theatre. Taylor will appear in the role of Bob Cratchit, joining a cast that already includes wife Kim and sons Henry and Rufus who were in the cast last year too.

(Photo of James Taylor in 2007 One Man Band concert at the Colonial Theatre, Pittsfield, by Jaime Goldenberg © BerkshireLinks.com)