To close the Boston Symphony Orchestra’s 2019 season at Tanglewood in the Berkshires, guest conductor Giancarlo Guerrero conducted the annual climactic Beethoven’s Ninth. The program opened with Arnold Schoenberg’s brief choral work Friede auf Erden, which translates to “Peace on Earth.” It has roots as a Swiss Yuletide poem, as Ode to Joy originated as a drinking song, making them perfectly suitable bedfellows for a Tanglewood afternoon!

Conductor James Burton’s Tanglewood Festival Chorus was outstanding; I am always in awe of the magnificient instrument they become, the synthesis of scores and scores of voices into some bespoke thing that pleases the senses as it moves the soul. For the Beethoven, of course, they are augmented by a solo quartet, soprano Nicole Cabell, mezzo-soprano J’Nai Bridges, tenor Nicholas Phan, and bass Morris Robinson. 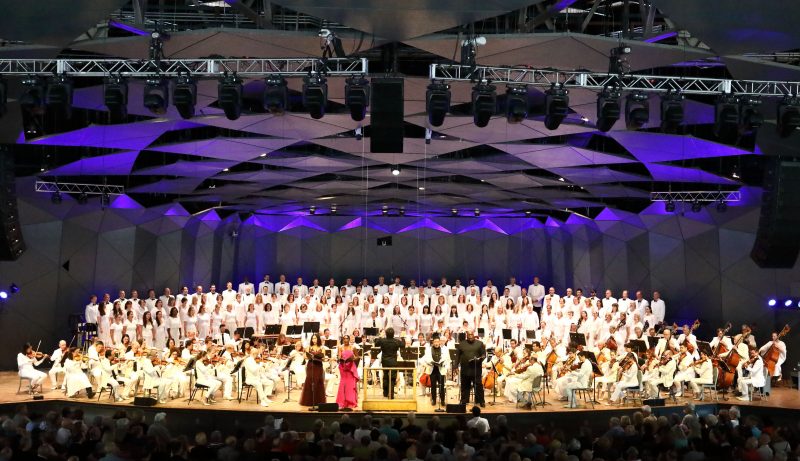 Maestro Guerrero, a native of Nicaragua who is music director of the Nashville Symphony, conducts with a focused and bold manner. Without seeming at all histrionic, he commands your attention – there was one passage where it looked as if he were an augur boring through the podium.

The program, with the “peace on earth” preface concluding in time for the national bell-ringing, reflects the orchestra’s decision to participate in what seems like a misguided project of the National Parks Service, of all people, to mark the anniversary of the arrival in the Virginia colony of a ship carrying slaves from Africa. We say misguided because the only people who may be up in the air about slavery today are busy dismantling America’s National Parks, and generally making life miserable for everybody.

Furthermore, descriptions of the ship’s arrival in 1619 betrayed the attention to detail of a Philadelphia lawyer, because 1619 did not mark the arrival here of slavery, which was a tactic used by indigenous peoples of North America, as it was on every other continent. Slavery is more a defect of human character, than an aspect of nationality.