You are here: Home » Uncategorized » Blind Boys of Alabama, The Holmes Brothers in concert at the Mahaiwe in the Berkshires.

The Blind Boys of Alabama and The Holmes Brothers inaugurated the W.E.B. DuBois concert series with thrilling shows in the Mahaiwe Theatre on February 10, 2002. Whether or not the town of Great Barrington ever decides to embrace the memory of its native son DuBois, it owes kudos to Club Helsinki for producing a concert that moved the town to the epicenter of the Gospel and Rhythm and Blues world, if only for one evening. 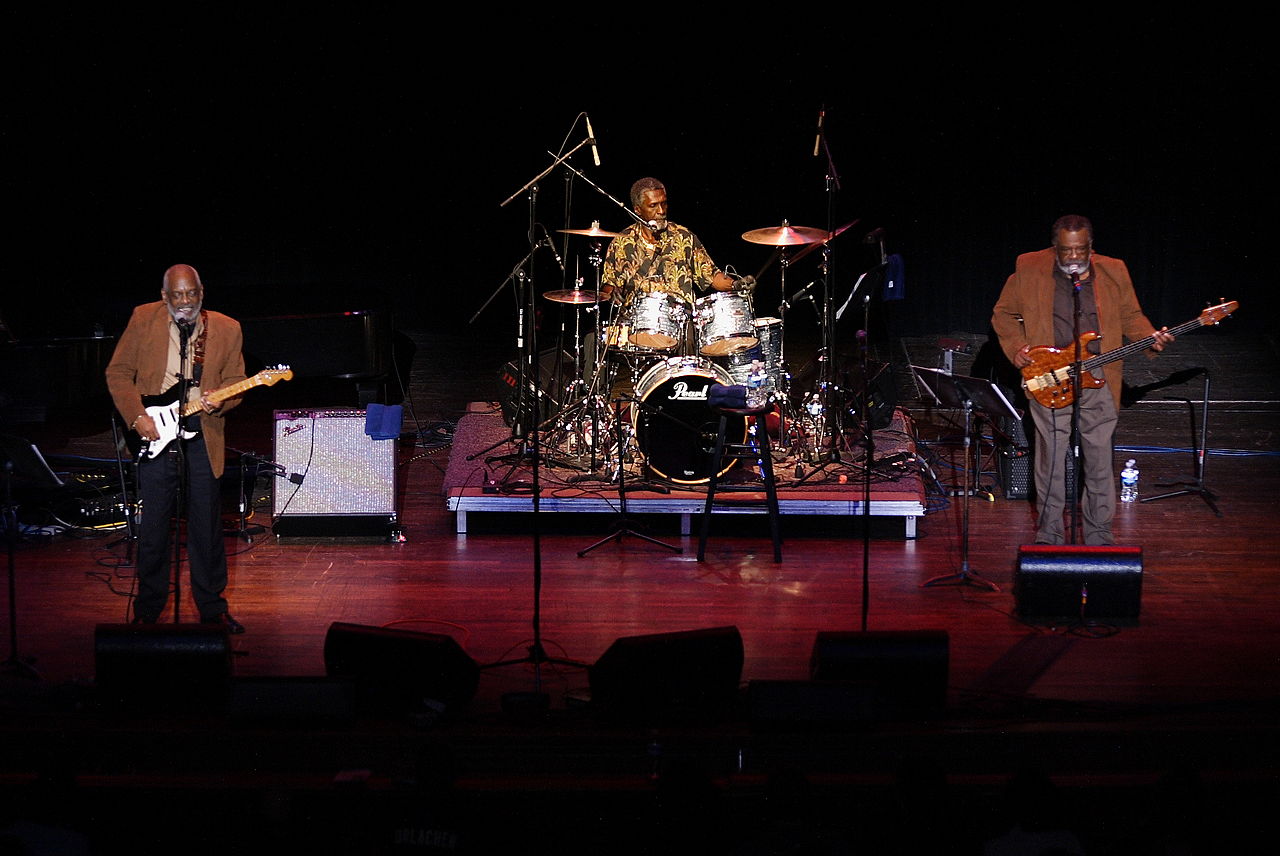 When you enter the Mahaiwe, the slick of modernity slips away and you’re in a place with no straight lines, no shiny surfaces, almost no separation between the performing space and the audience. It’s small enough for whispers, but big enough to hold a whole lotta music; and it has electricity too, which was put to good use by The Holmes Brothers, three masterful blues rockers whose express purpose is to “make a joyful noise to the rock of their salvation.”

Led by Wendell Holmes’s raspy ecstatic vocals and fanciful electric piano, kicked along by the sharp drumming of Popsy Dixon and throbbing bass of Sherman Holmes, who also harmonize to such effect that you’re thinking there must be a choir offstage, the Holmes Brothers opened with King Jesus Will Roll All Burdens Away, setting the tone for an evening of music that would reach unimaginable heights.

That song was one of several they played from “Speaking in Tongues,” widely regarded as one of the best albums of 2001. After three numbers at the keyboard, Wendell played electric guitar the rest of the way, delivering a little country twang, some straight ahead rock, and some searing, eccentric riffs of his own creation.

On the third tune, “one from our youth, called Precious Lord,” Popsy Dixon stepped away from his drumkit, donned his sports jacket, and took the vocal lead with a haunting voice and a penetrating gaze.

Wendell’s big brother Sherman also contributed nicely to the verbal mix in addition to maintaining a tastefully varied electric pulse throughout, especially on “Thank You Jesus,” where he and Wendell swapped lines back and forth.

The oddest thing of the night was that during intermission, while the Holmes Brothers were mingling and signing autographs in the crowded lobby, I was rueing the fate of the group that had to follow such an exciting and satisfying set. I soon learned though, that relative to a performance by the Blind Boys of Alabama, there is no opening act, everything theretofore is prologue.

Their performance centered on their latest release, the Grammy-nominated “Spirit of the Century.” “Run On For a Long Time” was the energetic opener, with leader Clarence Fountain belting out the verses and the others harmonizing on the chorus over a driving rhythm section. About sixty minutes later, Fountain introduced the a capella finale: “One mo’- one mo’- the Rolling Stones cut it, but it wasn’t a Rolling Stones song, it’s my song. Listen as I tell you… ‘This May Be The Last Time’…”

Fountain was an entertaining leader throughout, displaying an impish side when he would rise from his usual seated position, shrug his jacket off one shoulder, put his hand on his hip and mimic an Elvis move or two. He delighted in mentioning Great Barrington, Massachusetts, and reminded the audience to watch the group on the upcoming Grammy telecast. Introducing one number, he said, “I didn’t come all the way from Alabama looking for Jesus, I brought Him along.”

The most stunning part of this astounding concert was Jimmy Carter’s twenty minutes of ecstatic singing, testifying, and witnessing among the audience, having been guided down from the stage by one of the sighted band members. It was a breathtaking, spellbinding performance by Carter, who bears an uncanny resemblance to Lateshow bandleader Paul Shaffer. His facial expressions showed the range of human emotions and his singing included holding a single note for what seemed to be as long as some entire pop tunes.

Meanwhile, the other Blind Boys were fully engaged with him in their own vocal ecstasy and the band was rocking ever more fervently, and loud enough to get the attention of sinners many miles away. Another highlight was the group’s Amazing Grace, set to the tune of House of the Rising Sun. (The popular arrangement of House of the Rising Sun has been credited to Dave Van Ronk, who passed away the day of this concert. Here is our 1999 interview with Dave Van Ronk.)

The evening began with a presentation in celebration of the life and work of Great Barrington native W.E.B. DuBois by children from the Jubilee School of Philadelphia, an alternative community school that grew out of a neighborhood reading program. In addition to reading their own tributes and poems, as well as some Langston Hughes poetry, the students talked about their own social studies research project; DuBois is recognized as a founder of sociology for his study of urban blacks in Philadelphia in 1896 and 1897. The children ended their presentation with a stirring rendition of Amazing Grace.