You are here: Home » Theatre reviews » A Funny Thing Happened on the Way to the Forum at WTF 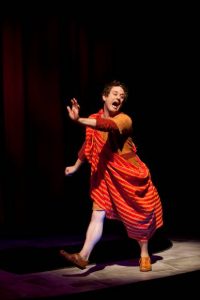 A Funny Thing Happened on the Way to the Forum is now bringing down the house at the Williamstown Theatre Festival’s hilarious, outrageous, and joyful staging of the Steven Sondheim musical. The ever twisting plot concerns the machinations of a wily slave Pseudolus (Christopher Fitzgerald) who to win freedom agrees to entice a young virgin from the next door brothel, imprisoned awaiting the sea captain to whom she has been promised, to instead end up, still virginal, in the arms of his master’s love-smitten son Hero (Bryce Pinkham) a willing accomplice, but a naïve wooer.

With his master, Senex (Jeremy Shamos) away, only to return unexpectedly and pant after the virgin himself Pseudolus is reluctantly aided by the head slave, Hysterium. In this zany plot, what is even more amazing is that the straight women’s roles are played so convincingly and so straight that they could be females in the roles. The virgin Phylia (David Turner) is so restrained in movement, so innocently aware and accepting of her supposed destiny that, especially in her song Lovely, becomes just that. And the mother of Hero, Domina (Chivas Michael), looking for her errant husband is a masterpiece of a male actor so taking on the role that it is pure realist comedy, never camp. 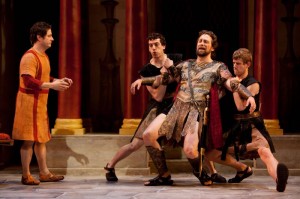 Graham Rowat as sea captain Miles Gloriosus, strides the stage manfully and dangerously. He is a couple of feet taller than most and easy to spot. Others swish in and out of secondary roles with agility and conviction. And all convey the sense of having as glorious a time as the ever-applauding audience is having. Sondheim’s musical style, chosen for the pitter-patter of the dialog, was zestfully rendered. Many of the songs, such as Comedy Tonight and Everybody Ought to Have a Maid, have become woven into the fabric of American music and are always a delight to hear again.

Director Jessica Stone has served her cast well, and Williamstown Theatre Festival has rewarded her with a magnificent stage setting in which to mount her miracle. The front curtain is etched with a rough sketch of decayed ancient Rome, huge arches, tall columns, all half there, all crumbling. But as the on-stage orchestra (skillfully in a pit that is navigated by actors and dancers and at times incorporated into the play itself) opens the play, the curtain does not rise but the ruined columns, the chipped towers, the half-arching arches get filled in by an invisible hand until Rome is complete again. Then the curtain can rise and the play begin.

And it does with a lifting of a second curtain. Then we see the great farce set. Three Roman mansions, each with a second story and windows, and even a roof on which an actor can emergy. Instead of the three “doors” necessary to a farce, this set has triple that. Actors climb columns agilely; virgins come out doors to enter other doors and reappear on a roof as the play speeds along in and out of the three great Roman buildings, each painted in a different glowing major color and all conveniently near to each other.

The opening night audience went absolutely wild at the play. Each song was clapped and cheered, and the final standing ovation went on a long time. A short review cannot begin to describe the glories of this production and the response of the audience to them. Early press releases that explained the casting decisions and defended their effectiveness and necessity, turned out to be accurate. The play could be hysterically funny without resorting to female impersonation for laughs only. An all male cast could convincingly produce this farce. Shakespeare knew this, of course, and never let himself be hampered by it.

To recapulate. The show is held together by the resourceful Pseudolus who is scrappy, crafty and a man who never gives up. He is abetted by the reluctant Hysterium, who is an up-tight character until he must, to save the plot, throw himself with vigor into the role of dead-virgin. Hero is delightfully naïve, Phylia obedient and docile and appealing. Hero’s father is delightfully smitten with the virgin and active in his pursuit of her. David Constable is a swaggering pimp. A wonderful cast!

And last note on Plautus, whose ancient Roman farces inspired A Funny Thing Happened on the Way to the Forum. He was a nobody. But he had a good mind, and some how a good education in the sense of knowing Greek and Roman farce plots he could borrow from. He walked the streets with his mill, grinding corn, he played bits in minor shows. Then he decided to be an author himself and just as his servant in this play win his freedom. He wins his own freedom—success and the reward was Roman citizenship, which granted the right to give himself a three part name, so he chose a funny one: Titus Maccus Plautus, meaning “splayfoot clown.” Theatre history books honor his tremendous output and his popularity has resulted in more of his manuscripts being preserved than those of any other Roman dramatist.

Plautus plots at times help end a tangled mismash at the end of a Shakespeare play such as Twelfth Night with its reconciling of lost children and parents making way for harmony for all. As for the Plautus masterpiece now being given such a grand performance at the Williamstown Festival. Go!