2016 Tanglewood on Parade gala concert included four guest conductors, Stefan Asbury, Stephane Denave, Ken-David Masur, and Giancarlo Guerrero besides Boston Pops Conductor Laureate John Williams, who also is a composer of movie scores, including Star Wars, an excerpt of which was on tonight’s program. Even though March of the Resistance, from Star Wars: The Force Awakens, was just a small part of the program, it is noteworthy because George Shultz was in the audience. He was secretary of state during the Reagan administration, who’s Strategic Defense Initiative was nicknamed Star Wars, following the runaway success of the original movie in 1977. 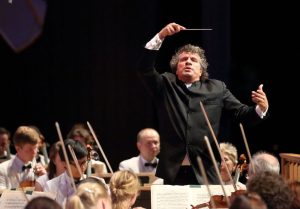 The format for this program differs from every other BSO concert on the Tanglewood schedule. There are always more orchestras and more conductors leading the musicians in more musical selections. What remains static year after year is the presence of the Boston Symphony Orchestra, Boston Pops Orchestra, and the Tanglewood Music Center Orchestra, each presenting a segemnt of the program and then all massing for the grand finale performance of the 1812 Overture, Tchaikovsky’s celebration of the defeat of Napolean’s army, which always blows the roof off the joint! Maestro Giancarlo Guerrero, music director of the Nashville Symphony Orchestra and native of armed-forces-free Costa Rica, was the aptly named choice to conduct the 1812 Overture, and he succeeded brilliantly in unifying the 140 or so musicians into one triumphant orchestra.

Returning to lead the Tanglewood Music Center Orchestra was Stephane Deneve, chief conductor of the Stutgart Radio Symphony and Brussels Philoharmonic, who can be heard here talking about working with the Tanglewood Music Center fellows – “…each year it is a different orchestra, but every year they seem to get better…” – and about La Valse, Ravel’s choreographic poem which he conducted tonight. The performance was spell-binding; hard to believe the orchestra was convened little more than a month ago, and wistful to know that it will disband later this month!

Opening the concert was Stefan Asbury, head of the TMC conducting program, with the BSO performing Night Train to Perugia, by Michael Gandolphi, who was called to the podium afterwards to share in the audience’s warm reception to the orchestra’s performance of his work. Next, Ken-David Masur, BSO assistant conductor, led a reduced orchestra and soloists Elizabeth Rowe on flute and Jessica Zhou on harp in a sublime performance of Mozart’s Concerto in C for Flute and Harp.

And in addition to the Star Wars piece, John Williams led the Boston Pops in the world premiere of Of Grace and Majesty, Suite from The BFG, before yielding the podium to Maestro Guerrero.

About Tanglewood: box office, tickets, getting there, nearby hotels

Follow this link for Berkshires travel information, including public transportation within Berkshire county and Amtrak and Peter Pan bus schedules.

The Tanglewood campus, summer home of the Boston Symphony Orchestra and the Tanglewood Music Center comprises several hundred acres in the towns of Lenox and Stockbridge. It is the location of the Koussevitsky Music Shed and Ozawa Hall, where hundreds of thousands attend concerts and a variety of events, including picnics. We always advise new visitors to arrive early and take their daily walking exercise wandering the beautiful Tanglewood grounds.

Here is a dynamic map of the Tanglewood grounds, with photos and information for such points of interest as Aaron Copland Library, Highwood Manor House, The Glass House, and The Lion’s Gate.