Saturday is the most festival-like day at the Tanglewood Jazz Festival, with performances on each of Tanglewood’s three stages (Theatre, Ozawa Hall, Koussevitsky Music Shed) plus a panel discussion sponsored by the Jazz Journalists Association on the patio at Saranak, former home of Serge Koussevitzky. 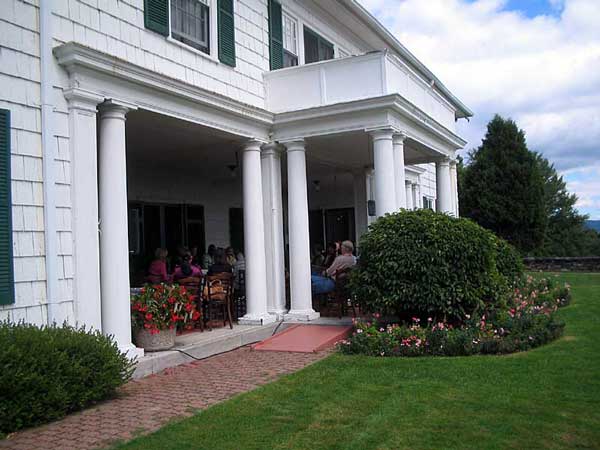 The Tanglewood Jazz Cafe added to festival-feel this year, with performances by up-and-coming jazz artists in informal settings near Ozawa Hall. They began ninety minutes before each major concert.

At noon, the Legends Trio featuring Skitch Henderson, Bucky Pizzarelli, and Jay Leonhart took to the Theatre Stage and first legend Henderson took to the microphone for remarks “before this epic of improvisation,” as he put it. The epic lasted but sixty minutes, close to a quarter of which were filled with Henderson’s pat show-biz anecdotes.

Bucky Pizzarelli did get a couple of opportunities to display his tasteful wizardry on his seven-string guitar and Jay Leonhart practically stole the show with his very funny talking blues about being seatmates with Leonard Bernstein during a cross-country flight. And a young violinist named Sara Caswell was a welcome addition to the trio.

We caught about forty minutes of the panel discussion which convened an interesting mix of musicians and journalists to grapple with “The Big Cross-Over: Jazz, Classical, Pop and Beyond.” You can’t argue with the location, about half a mile from the main gate on the side of the hill commanding one of the best views in the Berkshires, but for one to take in the whole program would’ve meant leaving the “Legends” show early and maybe being late to the 3 PM at Ozawa Hall.

As it was, we heard plenty, including comments on the increasing importance of the Internet, at the expense of major record labels, as a means of distribution. Panelist Walter Beasley, a saxophonist and long-time faculty member (and alumnus) of Berklee College of Music, said that he encourages his students to “do it yourself” rather than rely on established labels, adding that he makes more money today selling his own CDs at concerts than he would with a traditional label deal.

During a segment on terminology, panelist Donal Fox, whose program “Remembering the Modern Jazz Quartet: Donal Fox, Inventions in Blue” was a highlight of the 2003 festival, offered the cautionary note that “it’s an important historical fact that artists do not use the word ‘jazz’,” citing Louis Armstrong and Miles Davis as examples.


The very existence of any such thing as “Cross-over” was questioned by panelist Tom Reney, host of a daily jazz program on WFCR since 1984, who said he never sees references to such a genre in the mainstream jazz media. Beasley had a more provocative take on what may be seen by some as a meaningful genre when he said, “I hate smooth jazz because it isn’t smooth and it isn’t jazz.”

Probably due to logistics, the audience barely out-numbered the panelists, which is too bad because it was a very collegial group of experts, each of whom not only had pleny to say but also the facility to say it well.

Marian McPartland’s guest for her fourth annual taping of NPR’s “Piano Jazz” at Tanglewood was vocalist (and guitarist) Madeleine Peyroux, who, for about a week, had been the subject of articles in the British press that had her missing but that turned out to be a publicity stunt.

The ageless Ms. McPartland was at the top of her form, chatting with the audience that an arthritic knee and an injury to the other leg leave her “not one leg to stand on;” and that the constraints of taping for radio prevent her from being “free and easy as I like to be;” and introducing her guest as “a chart-topping chanteuse.”

Ms. Peyroux played selections from her current release “Careless Love,” about which she has said, “I am in love with every one of these songwriters as well as their songs. I was eager to make that heard during the recordings.”

It came across in performance, on Leonard Cohen’s “Dance Me To The End Of Love,” and Bessie Smith’s “Don’t Cry Baby,” and on Josephine Baker’s first hit, “J’ai Deux Amours,” which she explained that she means to reference her own dual allegiance for both France and the USA.

During the ninety or so minutes of the “live taping,” Ms. Peyroux seemed to be more comfortable in Ms. McPartland’s company, rather than in front of an audience of 3,600 fans, but her performance didn’t suffer for it. She was gracious, and sang beautifully; her voice sharing the fragile, vulnerable sound of Billie Holliday’s.

The headline event turned out to be a great crowd-pleaser but we found irksome because it was made to feel like dozens of sound samples rather than be allowed to coalesce into a fluid musical event. This was mostly the case during the opening set by the Count Basie Orchestra, when every solo was taken center stage followed by a bow to the audience and a handshake with band leader Bill Hughes and then the walk back to their seat.

They tell me that’s how it was done during the heyday of the Big Bands, but not only did it destroy the effect that was the composer’s object (in stringing together so many notes without big non-musical gaps), but it seemed demeaning to the musicians, the perfunctory handshakes resembling treats and pats on the head given to trick dogs.

Mr. Bennett’s set was much more fluid; his custom is to sidle up to his sidemen during their solos and so direct the spotlight – and the applause – on them. And speaking of applause, he got one of the greatest rounds ever heard here when he announced mid-set, “I’m not working for pay tonight – I’m sending it all to the fellows down south.”