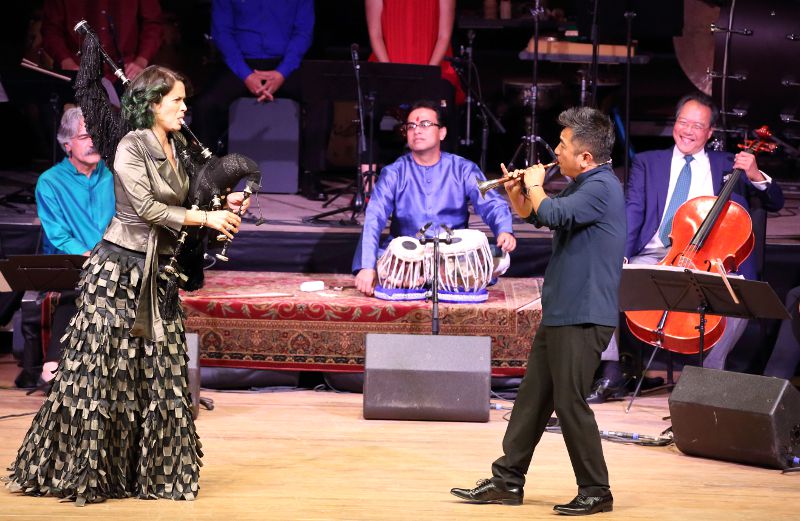 The Silk Road Ensemble, with Yo-Yo Ma, used the Koussevitsky Music Shed at Tanglewood like a high school during their Aug. 7, 2016 performance, presenting both lessons in social studies and the senior assembly. Eighteen years since being co-founded by Yo-yo Ma at Ozawa Hall, the Ensemble presented a program that displayed their global roots, with segments being introduced by various members, each of whom stressed the social while while eschewing the pedantic.


They talked about being ready now to leave home, after 18 years of growing up; but the effect of the concert was a synthesis of disparate musical traditions, culminating in a glorious global hoedown, to wit: Kinan Azmeh’s composition Wedding, his representation of a Syrian wedding celebration, a public jam session that could last for days. His dedication, to “all the Syriancs who have managed to fall in love in the past five years,” gave the audience an opportunity to express solidarity with those beleaguered people. An extra-musical takeaway from the evening was the opportunity to look at and celebrate the wild differeces among peoples without resorting to polemics. Extra-musical? yes – not beyond, but to the max!

The audience responded to the opening minute or so with tittering and noisy whispers, because of the novelty of a strange instrument on one side of the stage communicating with an equally unfamiliar one on the other side. By the time Fanfare for Gaita and Suona concluded though, the whole house was totally into the world music thing, and the party was on. The gaita is the bagpipe of the Galician people from the northwest part of the Iberian peninsula, the suona is a Chinese horn, and the piece was developed by the players Cristina Pato and Wu Tong, who are as dissimilar to each other in appearance as are their instruments.

Like many of their colleagues, these two were featured several times tonight; Wu Tong especially notable for his singing, including both Manchurian and English verses of Going Home, which may merit a place in World Music lore for being lyrics set to the score of Czech composer Dvorak’s 1893 New World Symphony while in America, and which sounds like a Shaker hymn! When everything is improbable, nothing is, so, another highlight of this show was the Ensemble’s almost cinematic rendition of Billy Strayhorn’s Take the A Train, which took the audience on a raucous, rumbling ride under the streets of Manhattan and Harlem, with images of Ella Fitzgerald and the Duke Ellington Orchestra flashing in their minds.

If Tanglewood were simply Tanglewood, summer home of the Boston Symphony Orchestra, its Tanglewood Music Center and eight or nine weeks of classical music performed by the BSO and their various guest soloists and conductors, we Berkshires locals would have plenty to be grateful for. But it is so much more, for so many reasons, not least of which is that Yo Yo Ma claims it as a sort of home for his seemingly boundless musical explorations. Incidentally, he also has an actual home in the Berkshires. (Goat Rodeo Show at Tanglewood photo: Hilary Scott).

His latest musical trip led to the Goat Rodeo Sessions, the 2011 album he recorded with bsssist Edgar Meyer, fiddler Stuart Duncan, and mandolinist Chris Thile, which won Grammys for Best Folk and Best Engineered non-classical. Both the album and tonight’s show featured singer Aoife O’Donovan, of Crooked Still and Sometymes Why. She reprised No One But You, Here and Heaven, from the album and added a stunning rendition of Bob Dylan’s Farewell, Angelina.

Everybody but Mr. Ma took turns on other instruments; Meyer played piano on Franz and the Eagle, and No One But You; Thile, whose singing blended nicely with Ms. O’Donovan’s, also played fiddle and guitar; Duncan also played banjo. Except that Ma seemed to indicate that Meyer is musical director, the impression from the audience is that these are four musicians equally expert in their own domains and equally excited to be making music with peers, just for the fun of it.

Yo Yo Ma and the Silk Road Ensemble got the BSO’s 75th anniversary season at Tanglewood off to a rousing start with a pair of concerts in Ozawa Hall June 22 and 24. Whatever Maestro Koussevitsky had in mind when he established the orchestra’s retreat and training center in the Berkshires, not even a visionary of his stature would have forseen a concert opening with a green haired gaita player wending her way through the audience.

As the musicians assembled on stage and settled into an improvisation called Wandering Winds, Christina Pato, a raven-haired Spaniard (streaked with Kelly green), strolled through the audience on the lawn playing the gaita, the bagpipe of the Galician people of Spain. She is the second Galician bagpiper I’ve seen in concert, after Carlos Nunez, who toured with the Chieftains years ago. He drew references to Jimi Hendrix for the novelty his style and flair bore in comparison to highland pipers.

Although fresh and original to all appearances, Ms. Pato is anything but a novelty act. She has a Doctorate from Rutgers and briefcase full of other academic credentials, leads her own touring band, and is a member of the Silk Road leadership council. The prominence of her role in this report is a function of my predilections; the show was so varied and full of treats that one couldv’ve focused on a dozen other elements.

Such as the finale, Turceasca, from the Romanian gypsy tradition. It allowed all 17 musicians to seem to solo simultaenously, until a duet/duel developed between Wu Tong and (oops!) Ms. Pato. Wu Tong plays the Chinese sheng with the verve and personality one remembers from Dizzy Gillespie.

Besides the role of host/MC, Yo Yo Ma was largely an ensemble player, except on Qasida, premiered on the 22nd. A Silk Road commission by Dmitri Yanov-Yanovsky, from Uzbekistan, it was written for MA to play with Kayhan Kalhor on the ancient Persian kamancheh.

There were 20-30 minutes of encores, which resulted in as upbeat and cheerful an exiting audience as I’ve ever seen. They are sure to regale their friends about this event, a concert by the Silk Road Ensemble, at Ozawa Hall where Yo Yo Ma founded it in 2000. Depending on their predilections, they may focus their reports on the pipa, or the tablas, or the jang-go.

Yo-Yo Ma, a beloved Tanglewood fixture who has performed at the festival in all but one summer since 1983, opens the 2012 Tanglewood season with two performances featuring his Silk Road Ensemble in Ozawa Hall Friday, June 22, and Sunday, June 24. With musicians from around the globe, the Ensemble will perform a special program that reflects a diversity of styles and nationalities, combining Western and non-Western instruments from the old and new worlds in ways that transcend cultural boundaries.

Diana Krall performs Saturday, June 23, in the Koussevitzky Music Shed, where she last appeared at the festival in 2009. The double platinum-selling recording artist is known for her distinctive jazz stylings across a range of repertoire, especially tunes from the American songbook.

The Mark Morris Dance Group makes its annual appearance in two highly anticipated concerts Thursday, June 28, and Friday, June 29, collaborating as usual with Fellows of the Tanglewood Music Center. The program includes three Morris works: Something Lies Beyond the Scene, set to William Walton’s Façade: An Entertainment and featuring soprano and longtime TMC faculty member Phyllis Curtin in the role of narrator; Rock of Ages, set to the second movement of Schubert’s Piano Trio No. 2 in E-flat, D.897; and Festival Dance, set to Johann Hummel’s Piano Trio No. 5 in E, Op. 83.

A Prairie Home Companion, with Garrison Keillor and a colorful cast of friends from the shores of Lake Wobegon, has become a favorite Tanglewood tradition and once again broadcasts live from the Shed Saturday, June 30. James Taylor, another beloved and annual guest, appears in three concerts July 2, 3, and 4, in a program called James Taylor at Tanglewood, reflecting the style and the songs that have made him an icon. Tanglewood’s annual Independence Day fireworks display follow the July 4 concert.

On Friday, August 10, Pinchas Zukerman-who first performed at Tanglewood in 1969-acts as both conductor and solo violinist in an all-Bach program-a popular concert format throughout the history of the festival-that highlights some of the exceptional talent within the ranks of the BSO. In addition to Mr. Zukerman and guest harpsichordist John Gibbons, BSO principal flutist Elizabeth Rowe, principal oboist John Ferrillo, and concertmaster Malcolm Lowe take solo turns in an all-Bach program featuring the Brandenburg Concertos Nos. 3 and 5, the Violin Concerto No. 1 in A minor, BWV 1041, the Concerto in D minor for two violins and strings, BWV 1043, and the Concerto in C minor for violin, oboe, and strings, BWV 1060.

Yo-Yo Ma returns to the Shed stage Saturday, August 11, as soloist in Elgar’s cathartic Cello Concerto, with conductor Stéphane Denève, who also leads the orchestra in the world premiere of a BSO-commissioned new work by André Previn and Shostakovich’s riveting Symphony No. 5. Christoph von Dohnányi takes the podium once again Sunday, August 12, for a program spanning almost 200 years of the Germanic music tradition. Widely acclaimed pianist Paul Lewis makes his BSO and Tanglewood debuts as soloist in Mozart’s Piano Concerto No. 23 in A, K.488, bracketed by Beethoven’s Symphony No. 4 and Strauss’s Till Eulenspiegel’s Merry Pranks.

The young and adventurous Ébène String Quartet, which has rocketed to stardom in recent years, brings its fresh approach to string quartet performance to Ozawa Hall on Thursday, August 16. As is typical in Ébène performances, the quartet juxtaposes the classic with the new, first delving into Mozart’s Quartet No. 15 in D minor, K.421, and Tchaikovsky’s Quartet No. 1 in D, Op. 11, then changing gears with jazz selections arranged by the ensemble members and filled with improvisation.

The June 24, 2012 concert by Yo Yo Ma and the Silk Road Ensemble in Ozawa Hall at Tanglewood was great fun, as we reported at the time. We haven’t seen the DVD from the show, but the film that premiered MAy 9 on PBS is a wonderful souvenir of the event. Whereas the concert was over two hours long, the 60 minute TV version, which included perhaps 15 minutes of non-performance material, fully conveyed how brilliant and exciting this ensemble is. Here’s hoping it makes it onto heavy rotation on PBS!
Next Page »