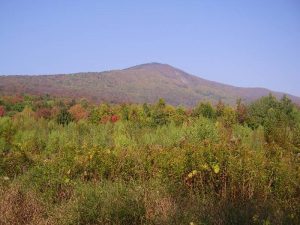 Mount Greylock is the highest point in Massachusetts, with an elevation of 3,491 feet. It spans the Berkshire county towns of North Adams, Adams, Lanesborough, Cheshire, Williamstown and New Ashford, dominating the Berkshire landscape; from the summit, dramatic views of 60-90 miles distant may be seen. It became Massachusetts’ first wilderness state park, acquired by the Commonwealth in 1898, to preserve its natural environment for public enjoyment. Wild and rugged yet intimate and accessible, Mount Greylock rewards the visitor exploring this special place of scenic and natural beauty.

“Prior to the arrival of Europeans the Mahican people were closely associated with this region. The traditional trade route connecting the tribes of the Hudson and Connecticut River Valleys (today, Route 2, known as the Mohawk Trail) passes beneath the northern flank of Mount Greylock. The mountain was known to eighteenth century English settlers as Grand Hoosuc(k). In the early 19th century it was called Saddleback Mountain because of its appearance (Saddle Ball, the name of the peak to the south, still reflects this).

“The origin of the present name of Greylock and its association with the mountain is unclear. It first appeared in print about 1819, and came into popular use by the 1830s. It may be in reference to its appearance, as it often has a gray cloud, or lock of gray mist upon his head, or in tribute to a legendary Native American chief, Gray Lock. Gray Lock (c.1670-1750) was a Western Abenaki Missisquoi chief of Woronoco/Pocomtuc ancestry, born near Westfield (MA). Gray Lock distinguished himself by conducting guerrilla raids into Vermont and western Massachusetts in the conflict variously known as Dummer’s War, Three Years War, Lovewell’s War, The War with the Eastern Indian or Father Rasle’s War. Although it is not clear whether he was actually ever personally associated with the mountain, perhaps in tribute to his notoriety the mountain came to bear his name.”