Joan Baez has been added to the 2013 Tanglewood popular artists schedule, on a June 23 Shed program that includes the Indigo Girls; they all performed most recently at Tanglewood in 1990. Ms. Baez hit the ground running with an un-billed set at the Newport Folk Festival in 1959. By the time she introduced the un-billed Bob Dylan to the Berkshires at the Boy’s Club in 1963, she’d had three gold records on the pop charts, and been on the cover of Time magazine. 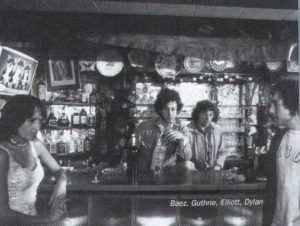 Besides all that, Joan Baez was a central figure in the coolest event ever in the Berkshires, the Rolling Thunder Revue party at Mama Frasca’s Dream Away Lodge on Nov. 7, 1975. For Mama Frasca, Joan Baez was the big deal that day, not Bob Dylan, who detoured his troupe to the Berkshires between shows in Springfield and Burlington, VT. The episode is featured in “Renaldo and Clara,” the greatest movie you’ll never see.

Ms. Baez shined a spotlight on the Free Speech Movement, took to the fields with Cesar Chavez, organized resistance to the Vietnam War, then forty years later saluted the Dixie Chicks for their courage to protest the Iraq war. Her earliest recordings fed a host of traditional ballads into the rock vernacular, before she unselfconsciously introduced Bob Dylan to the world in 1963. Amongst the many honors bestowed upon her, she has most recently been the recipient of the Lifetime Achievement Award, the greatest honor that the Recording Academy can bestow (2007). Day After Tomorrow, her 2008 studio album was praised by critics and nominated for a Grammy.

Decades into their career, the Indigo Girls still amaze conventional pundits with their ability to grow and thrive no matter what the state of the music industry, at any given point. Saliers and Ray began performing together in high school, transferred their honest, urgent performing style onto the stages of countless small clubs, then saw their public profile take off with the 1989 release of their self-titled breakthrough (an album that included the first hit, Closer To Fine, and went on to win Best Contemporary Folk Recording at the 1990 Grammy’s).

On their fourteenth studio album, Grammy-winning folk-rock duo, Indigo Girls deliver a beautifully crafted batch of songs that revel in spirited simplicity. Alternating richly textured storytelling with moody ruminations on modern-world worries, Beauty Queen Sister (IG Recordings) reveals a fierce longing for a more idyllic existence while still celebrating the extraordinary in everyday living. Thanks to its graceful mix of openhearted songwriting and lush, intricate arrangements – not to mention powerful performances by the band and their brigade of guest musicians – Beauty Queen Sister ultimately allows the listener to slip into the sort of dreamy serenity that Amy Ray and Emily Sailers sing of striving for throughout the record.

Joan Baez added to the 2013 Tanglewood schedule, along with the Indigo Girls, reprising a double bill at Tanglewood 23 years ago.