Frances Benn Hall, who died Aug. 30, 2014 aged 96, reviewed theatre in the Berkshires for NewBerkshire.com and BerkshireLinks.com since the late ’90s. Many of her reviews are available here and we’re in the process of re-posting many more that have fallen off the web over the years.

Franny Hall is the author Ezra’s Noh for Willie and Other Plays, a collection of plays, many of which have been performed in the Berkshires. Ms. Hall graduated from the University of Wisconsin in 1941: Sinclair Lewis was one of her teachers, Howard Moss a colleague. After graduation, she moved to New York City and shared an apartment in Greenwich Village with Merce Cunningham. (Ms. Hall’s reminiscence of a gift from Cunningham) 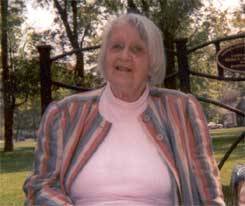 Praise for Ezra’s Noh for Willie and Other Plays
“These noh plays have the charm of miniature paintings.”
– William Gibson, Playwright

“The Delphic Players are proud to have paired Frances Benn Hall’s Ezra’s Noh for Willie with Yeats’ The Only Jealousy of Emer in a festival at the Lyric Theatre in Belfast that featured contributions by the Royal Shakespeare Company and Britain’s National Theatre.”
– Louis Muinzer, Director, The Delphic Players.

“Frances Benn Hall has had the original and interesting idea of taking well-known figures or characters and using a technique adapted from the Japanese Noh Theatre to dramatize their inner experience. These little “ghost” plays with their evocative use of quotation, music and dance, offer a theatrically fresh, often poignantly unexpected way in to the hidden contents of famous lives. The sense of place they evoke through simple means is a part of their charm – Byron at Via Reggio, Hawthorne at Tanglewood, and Lady Gregory on Ben Bulben.”
– Katherine Worth, Author, The Irish Theatre of Europe.