By Dave Read (July 24, 2022 concert) – BSO music director Andris Nelsons led another diverse program on a sweltering, sunny afternoon in the Berkshires. The first piece, In Memoriam: The Colored Soldiers Who Died for Democracy, was composed by William Grant Still in 1944, at the request of the League of Composers. 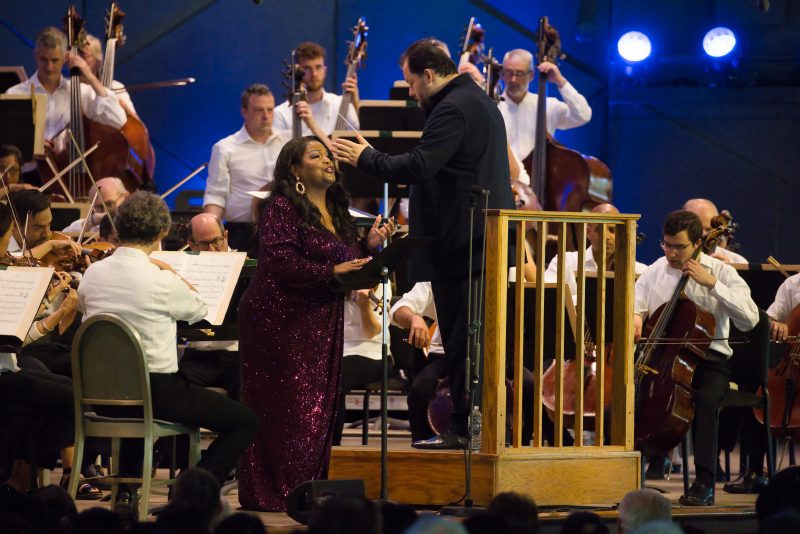 As you’d expect, it is an evocative, sombre piece, which “…closes on a note of resoluteness but not resolution…as if to indicate that the struggle was only just beginning.” Within a few years, the armed forces of the United States was no longer segregated by race.

The second selection, Lilacs, for voice and orchestra, amounted to a star turn for soprano Latonia Moore, today making her BSO/Tanglewood debut. A commission by the BSO, George Walker composed the score as a setting for Walt Whitman’s poem, When Lilacs Last in the Dooryard Bloom’d, which itself mourns the assassination of President Abraham Lincoln.

Whitman is more than a mere poet – he is a prime mover of American poetry, the poetry of the new world, which represents an about-face from British and old world poetry. (There, the arts are patronized by the Crown and her nobles; here, the artist patronizes the people and nature.)

Whereas a musical adaption of Whitman, even if by a composer on par with Beethoven or Mozart, is bound to be problematic, there is no problem at all with the voice and artistry of Ms. Moore. She sang such big, rich lines that – well, I am resisting the temptation to say that her voice contains multitudes!

A walk on the Lawn at intermission inspired us to remain there, for the welcome breeze blowing off Stockbridge Bowl, for the Piano Concerto No. 2 by Johannes Brahms, with soloist Seong-Jin Cho. Notwithstanding the felicity of seats in the Koussevitsky Music Shed, and intimate proximity to the orchestra and soloists, it felt as if Brahms had composed his famous and beloved concerto to be consumed with the greater proximity to nature afforded by a place on the lawn.

We sit so close to each other inside auditoria that the little incidental noises of our seatmates can disturb our reveries and detract ever so slightly from the enjoyment of a musical selection. On Tanglewood’s vast lawn, however, those little noises are soaked up by the quiet woosh of the breeze that seems to heighten the reverie induced by the soloist and orchestra. A native of Seoul, Mr. Cho came to the concert world’s attention when he won the Chopin competition in 2016, and will release his recording of today’s piece later this year.