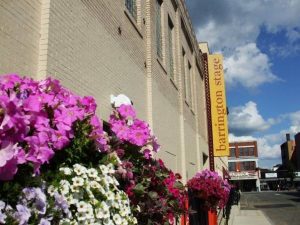 The 2012 schedule at Barrington Stage Company in Pittsfield adds an interesting array of theatre to the Berkshires cultural calendar, including plays by or based on the work of such writers as Arthur Miller and William Golding, plus the musical favorite Fiddler on the Roof. BSC’s reputation for launching important and popular new plays shoud be bolstered by the world premiere of Dr. Ruth, All The Way, which is the first product of its New Works Commission program. Also new for the Barrington Stage Company’s 2012 season is its partnership with the Berkshire Museum where the BSC Youth Theatre production of Disney’s Beauty and the Beast Be Our Guest! will be staged. Barrington Stage Company tickets contact information.

Update: Performances of Dr. Ruth, All The Way now June 19 through July 21.

BSC Mainstage – Fiddler on the Roof

Barrington Stage Company’s 2012 schedule features Fiddler on the Roof, the Tony award winning play based on characters and stories created by Sholom Alecheim. Fiddler on the Roof is about the milkman Tevye and his family told by way of one of the most popular scores in the American theatre, Tradition, Matchmaker, Matchmaker, Sunrise, Sunset, and Far from the Home I Love..

BSC Mainstage – All My Sons

How far are you willing to go for the American Dream? Set in post-World War II, Arthur Miller’s landmark drama examines the relationships between fathers and sons and the price of living the American Dream. An explosive secret threatens to tear the family apart in this powerful play about the conflict between business ethics and taking responsibility for one’s actions.

BSC Mainstage – See How They Run

The third Mainstage play on BSC’s 2012 schedule is the 1945 British comedy See How They Run by Philip King. The play is an English farce about a young vicar’s wife who tries to fit into a small tightly knit town.

BSC Mainstage – Lord of the Flies

Barrington Stage Company’s fall production will be the New England premiere of one of the 20th century’s greatest novels, William Golding’s Lord of the Flies, adapted for the stage by Nigel Williams. Lord of the Flies has been named one of the 100 best English-language novels of the 20th century by TIME Magazine and ranked #25 out of 100 on the Modern Library 100 Best Novels list.

2012 schedule at BSC Stage 2 opens with the New England premiere of Lungs by Duncan Macmillan, directed by Aaron Posner, who returns after his success with last season’s hit production of My Name is Asher Lev. Lungs is intimate drama about chance, change and consequence and how a couple deals with sex, parenthood, and responsibilities.

Dr. Ruth, All the Way is the second production on the 2012 schedule at BSC Stage 2. It is a New Works Commission by Mark St. Germain, who wrote Freud’s Last Session, which is the longest-running hit play at Barrington Stage. The play tells the story of Karola Ruth Siegel, the girl who became “Dr. Ruth,” the pioneering radio and television sex therapist, but only after escaping the Nazis in the Kindertransport and joining the Haganah in Jerusalem as a scout and sniper.

The third production on the 2012 schedule at BSC Stage 2 is the East Coast Premiere of The North Pool, by Pulitzer Prize-nominated playwright Rajiv Joseph. Giovanna Sardelli, who staged the world premiere of Joseph’s Animals Out of Paper, directs The North Pool. Rajiv Joseph authored last season’s hit Broadway play Bengal Tiger at the Front Gate that starred Robin Williams.

The seventh season of Barrington Stage Company’s Musical Theatre Lab features a workshop production of the garage rock band musical The Black Suits. The musical tells the story of a high school garage band on suburban Long Island trying to win The St. Anne’s Battle of the Bands.

BSC Youth Theatre at Berkshire Museum – Disney’s Beauty and the Beast Be Our Guest!

BSC’s Youth Theatre production of Disney’s Beauty and the Beast will be a collaboration with the Berkshire Museum and presented in the Museum’s theatre. Auditions for Berkshire County youth will be held in March.

Single tickets will go on sale February 15, 2012. Subscriptions for the Mainstage and Stage 2 seasons are now available. Mainstage FlexPasses start $108 and Stage 2 Passes start at just $81. Groups of 15 or more should contact Group Sales at 413 236-8888 for additional discounts. Affordable Theatre For All Continues In 2012: