You are here: Home » export » Review of Arlo Guthrie concerts in Pittsfield and Springfield, MA

Arlo Guthrie’s 1967 mega-hit “Alice’s Restaurant Massacree” had no bigger fan when it came out than me, then a freshman in college. By the summer of 1969, I’d dropped out and was ordered to report to the South Boston Navy yard to be “injected, inspected, detected, infected, neglected and selected.” I, too, was informed that I was unfit to serve.

Present for a live broadcast of “Alice’s Restaurant Massacree Revisited” at the Guthrie Center in Housatonic ten or so years ago, I marvelled at how well Guthrie had updated it, to include Richard Nixon and the mysterious gap in the Watergate Tapes.

Hearing it on successive nights, Nov. 16th at the Colonial Theatre in Pittsfield and then at Symphony Hall in Springfield, was a bit of a drag, however, and it was apparent that Guthrie has had enough, too. In fact, he announced that he’d just made a deal to play the Colonial every year around Thanksgiving, adding that “the 50th anniversary is probably the next time you’ll hear (it).”

Removing it from the setlist will make room for more of Guthrie’s exquisite treatment of other people’s songs, and for him to play more of his own affecting and timely work, such as his Hurricane Katrina lament, “In Times Like These.” 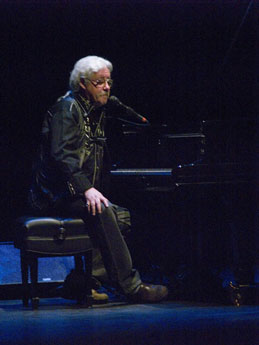 That is the title song on his recent release which was recorded live with the University of Kentucky Symphony Orchestra, directed by John Nardolillo, who conducted the Springfield Symphony for the Nov. 17th concert.

A highlight of both concerts was the version of “St. James Infirmary” (also on the new CD) that Guthrie learned from his father Woody‘s sidekick Cisco Houston. The solo version is superb, his rich voice and deft guitar play cast a spell on the audience. The orchestral version, with some especially nice trombone and clarinet riffs, carried everybody all the way to the Big Easy.

Both nights Guthrie played “My Peace,” a recently discoverd lyric of Woody Guthrie‘s that he wrote music for; a simple, sweet song, and a poignant collaboration that defies death.

Another new element both nights was an unnamed ragtime tune played on the concert grand piano that he wrote forty years ago. It had none of the flash you may expect from ragtime; instead it had a restraint and a sneaky complexity to it that was very satisfying.

Guthrie’s guitar mastery was best displayed Friday when he played “St. Louis Tickle,” a rag that he learned from Dave Van Ronk, “an old friend” who he said he’d been missing. He said that until he heard Van Ronk do it, he thought ragtime could only be played on piano. (Read more about Van Ronk and ragtime in our 1999 interview with Dave Van Ronk – and see a YouTube clip of him playing “Cocaine.”)

One of the most mind-blowing things that you’ll ever hear Arlo Guthrie say is that his first memory is of standing next to another of his father’s friends, Lead Belly, the great musician who died from Lou Gehrig’s disease in NYC in 1949.

Steve Goodman‘s “City of New Orleans,” also on the new CD, is always a concert highlight, another example of Guthrie’s nimble piano playing. We were at the benefit concert Guthrie put on in Worthington, MA in 1975, where we heard Steve Goodman and Guthrie’s brand new band Shenandoah. Here’s a link to Rising Son Records, where you can see a video of “The Motorcycle Song” from that show, another song he played in Pittsfield.

Where’d the name “Arlo” come from?

If you ever wondered how he got his name, you can find out in an interview we did with Arlo Guthrie at the Guthrie Center in 1998.