You are here: Home » James Taylor

We got lucky with the end-of-show crowd surge at James Taylor’s July 4, 2014 Tanglewood concert, recording five minutes of fairly steady video to afford a good look at how much fun he is having. Of course, the audio ain’t so hot, but still worth it to catch Lou Marini’s hot sax solo – and related hamming it up!

END_OF_DOCUMENT_TOKEN_TO_BE_REPLACED

This video of James Taylor being accompanied by Yo-Yo Ma on Sweet Baby James, recorded Sept. 15, 2008 on the porch of the Red Lion Inn at Stockbridge, is blowing up the Internet – at least my little piece of it!

END_OF_DOCUMENT_TOKEN_TO_BE_REPLACED

Something about James Taylor’s Fourth of July concert at Tanglewood felt low-key, but that’s in reference to a dozen or so such, which always rank among the most exciting shows of the year. Our expectations may have been out of whack because his July 4, 2008 show exploded into a celebration of his sixtieth birthday. Maybe now that the ¾ century mark is within shouting distance, seventy is not so big a deal? 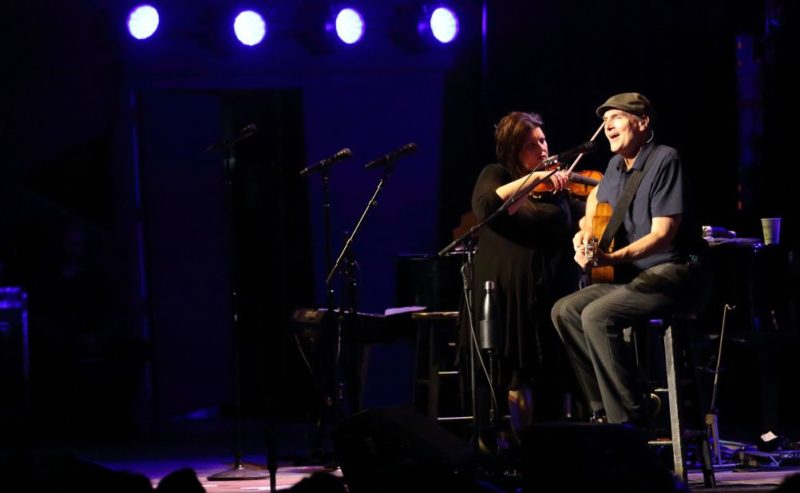 My reading of the show doesn’t extend to the usual aspects, such as the favorites-filled setlist of 25 songs, the 218 autographs from the lip of the stage during intermission, nor the revival-like 3 song encore when everybody got into the act, nor his awesome band. I thought he ceded primacy to Mike Landau on Steamroller, which his ace guitarist did not squander, before cutting loose with his own axe-indulgence during a coda that would not quit.

The stagecraft of James Taylor 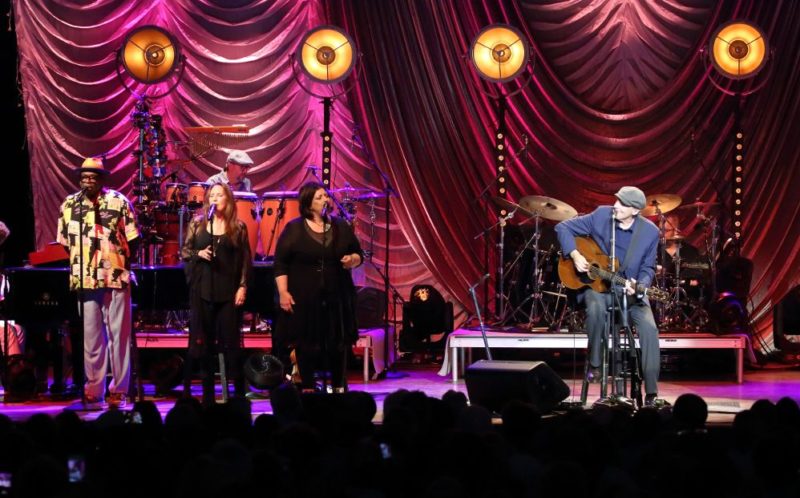 James Taylor is a master of stagecraft, that aspect of a musician’s duty to an audience that cannot help but color his virtuosity and singing. Stagecraft, a.k.a. patter, is the golden thread a singer weaves through a performance. James Taylor is so good at it sometimes that it steals the show; tonight it was spot-on, meaning that I wouldn’t have noticed it, except that I had an eye out for it.

The Fourth of July James Taylor concert at Tanglewood is a “bucket list” sort of event; it is a musical performance with social implications elbowing their way to the fore. It is a generational thing, with an abundance of kids running around and no shortage of patrons for whom the metaphorical bucket is the last thing they want to be thinking about. Not annual, but since Mr. Taylor built a house near October Mountain seventeen years ago, there has been at least one James Taylor Tanglewood show almost every year.

Here are snapshots of Lawn Nation, as James Taylor likes to call his Tanglewood audience. The images were made around half past six, July 4, 2018.

END_OF_DOCUMENT_TOKEN_TO_BE_REPLACED

James Taylor, whose public attachment to such establishment organizations as the Boston Red Sox and Boston Symphony Orchestra make him seem like the Hilary Clinton of singer-songwriters, had a Bernie Sanders moment during his Fourth of July concert at Tanglewood. Over the years, whenever he introduced a new song onto his tried and true setlist, he would mollify his adoring audience by telling them that it sounds just like all the rest. This year he sounded vexed, letting his stage persona go right to the edge: “I know you didn’t come here for no goddam new songs.” Whether he was merely freshening a stale old joke, or is feeling pinched by audience expectations, it still was every bit as good a concert as we’ve attended in the Tanglewood series going back two decades.

The one variation in the series was his 2002 appearance with John Williams and the Boston Pops when, after reciting Aaron Copland’s Lincoln Portrait to open the program, he returned with an ad hoc quartet of guitarist John Pizzarelli, Larry Goldings on keyboards, drummer Gregg Bissonette, and Jimmie Johnson on bass, with the Pops in an accompanying role. It was a very entertaining set and it left us thinking he was looking down the road toward shows with an emphasis on singing within a looser, jazzier setting.

Coming four days before the BSO’s opening night, this show was the tenth on an outstanding roster of popular artists that began June 17 with Dolly Parton and included Earth, Wind, and Fire, Brian Wilson, Jackson Browne, the penultimate broadcast ever of A Prairie Home Companion, with Garrison Keillor, and Bob Dylan. This show was similar to the one Bob Dylan put on 2 nights earlier in a few respects: each fronts an awesome band, each covers songs written by others, and each crafts a setlist that leaves his fans gasping for breath!

Something in the Way She Moves
Everyday
Walking Man
Don’t Let Me Be Lonely Tonight
Today Today Today
Country Road
On the 4th of July
Copperline
Carolina in My Mind
(I’ve Got To) Stop Thinkin’ ‘Bout That
Fire and Rain
Shower the People
The Frozen Man
The Promised Land
You’ve Got a Friend
Angels of Fenway
Up on the Roof
Sweet Baby James
Steamroller
Mexico
Your Smiling Face
Encore:
In the Midnight Hour
How Sweet It Is (To Be Loved by You)
You Can Close Your Eyes

END_OF_DOCUMENT_TOKEN_TO_BE_REPLACED

James Taylor’s concert at Tanglewood July 4, 2015 attracted another sell-out audience that packed the Koussevitsky Music Shed and temporarily converted the sweeping lawn area into the 2nd most populated town in the Berkshires! The Washington, MA resident, frequently misidentified as living in Lenox, was accompanied by the familiar cohort known as his All Star Band, plus wife Kim and son Henry. Everybody lucked out when the weather went from dreary and drizzly to bright and sunny in time for the show.

Mr. Taylor released a new album recently, Before This World, his first in 13 years and 17th studio recording overall, which spent a week at the top of the charts! Tonight’s show featured several songs from it – Angels of Fenway, Montana, and Today, Today, Today, each of which received an extra decibel of applause. Angels of Fenway relates his experience of the 2004 Boston Red Sox’ release from the “curse of the Bambino” when they overcame an 0-3 deficit to beat the New York Yankees for their first championship since selling Babe Ruth to the Yankees in 1920.

Introducing the other new songs, Taylor said that as is the case with so many of his songs, they too reference his 1968 Apple/Beatles bonanza, when, despite doubts and frustrations, he knew he was “the luckiest guy on the planet.” His demo had gotten the attention of Peter Asher, which led to an audition with the Beatles at the same time as when they were recording the White Album! Since then, he seems to have done all he could to justify that luck, producing a body of work that manifests his sense of gratitude.

Having attended many of the 24 concerts he has performed at Tanglewood, we can attest to his consistent generosity, toward both toward his fans in the audience and his fellow musicians on stage. He always answers a few shouts from the auidience during the set – “thank you, sir, love you, too” – “yup, we’re gonna do that one” holding up the setlist, which today ran to 25 songs, including 3 in the “encore” portion. While the band was offstage during the 20 minute intermission, James taylor stayed busy working the stage rim, signing autographs and mugging for cellphone snapshots.

END_OF_DOCUMENT_TOKEN_TO_BE_REPLACED

As if the ghost of Paul Revere had gotten loose, with a mind to make mischief in the Berkshires, in the days and hours leading up to James Taylor’s 4th of July concert at Tanglewood, a quiet rumor rose to a dull roar that a British were coming – to wit, Sir Paul McCartney would make a special guest appearance.

That would be a reunion of the former Beatle and the first artist signed to the beatles’ Apple records. The anicipation built and built during the concert, as Taylor made 3 or 4 references to his lucky days in London, where he auditioned for McCartney and George Harrison while the Beatles were at work on the White Album. In fact, he began the show with the very audition song Something in the Way She Moves! But it never happened, and I don’t think anybody was disappointed. (McCartney did made an appearance, via video, at Taylor’s 60th birthday celebration here six years ago.)

It was another sold-out Tanglewood gig for Taylor, who appeared fit as a fiddle after taking last year off from touring to concentrate on the latter part of the singer-songwriter job description. He performed one new song tonight that’ll appear on an album eventually – Today, Today, Today. The balance of his typically generous setlist was familiar, including: Handy Man, Fire and Rain, Up on the Roof, Sweet Baby James, You’ve Got a Friend, Buddy Holly’s Everyday. Over the course of the nearly three hour show (including encores), everybody in the band and vocal quartet got the spotlight. Michael Landau, Luis Conte, Walt Fowler, Andrea Zonn, Kate Markowitz, Arnold McCuller, David Lasley, Larry Goldings, Steve Gadd, Lou Marini, Jimmy Johnson. His wife Kim and son Henry joined the vocalists for a couple numbers, too.