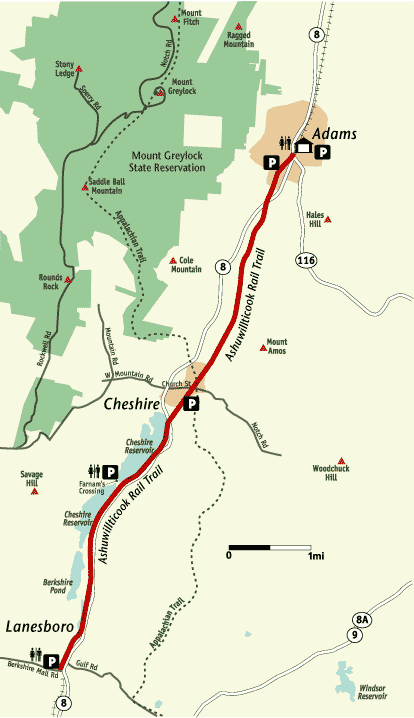 MassDOT Announces Temporary Closure of Southern Section of Ashuwillticook Rail Trail – The southern section will be closed to the public beginning on Monday, March 16. The closure is necessary to facilitate Phase I of the resurfacing project that seeks to upgrade an 11-mile section of the rail trail.

Bicycling in the Berkshires

Bicycling in the Berkshires is getting better for visitors and locals because of the development by the MA Dept. of Conservation and Recreation of the The Ashuwillticook Rail Trail, which is overseen locally by the Berkshire Bike Path Council. Berkshire Regional Planning Commission (BRPC) and the Berkshire Bike path Council (BBPC) help the Boston Metropolitan Planning Organization (MPO) gather information regarding the popularity of multi-use trails state wide. The data we collect is used to advocate for greater trail development.

Imagine Mount Greylock as the hub of a network of trails, that re-purpose abandoned railroads, and that use other rights-of-way for the creation of a veritable wonderland for persons eager to power their own way through the Berkshires.

The Ashuwillticook Rail Trail is a former railroad corridor converted into a 10-foot wide paved, universally accessible, passive recreation path. The Ashuwillticook runs parallel to Route 8 through the towns of Cheshire, Lanesborough, and Adams. The southern end of the rail trail begins at the entrance to the Berkshire Mall off MA Rte. 8 in Lanesborough and travels 11.2 miles north to the center of Adams. Parking lots and restrooms are available at selected locations along the way.

The rail trail passes through the Hoosic River Valley, between the Mount Greylock and the Hoosac Mountain Ranges. Cheshire Reservoir, the Hoosic River, and associated wetlands flank much of the trail offering outstanding views of the scenery and abundant wildlife. The name Ashuwillticook (ash-oo-will-ti-cook) derives from the Native American word for the south branch of the Hoosic River and literally means “at the in-between pleasant river,” or in common tongue, “the pleasant river in between the hills.” The name was adopted for the trail as a way to reconnect people to local history and the natural environment.